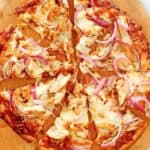 This post contains affiliate links. As an Amazon Associate, I earn from qualifying purchases.

Pizza may be originally from Italy, but it truly came into its own in the US. While they have been making pizzas in Naples the same way for hundreds of years, Americans created almost dozens of varieties of pizzas with almost endless toppings. California Pizza Kitchen is known for its innovative and unique pies like Barbeque Chicken Pizza. The next time you are craving a slice, skip delivery and trying making this homemade BBQ Chicken Pizza recipe!

This is NOT Your Everyday Pizza Pie!

When it comes to pizza, everyone knows the basic formula: Dough, tomato sauce, mozzarella cheese, and toppings. But you can forget all that when making this BBQ Chicken Pizza recipe!

While this pizza may start with the same dough base as a regular pie, things quickly get much more interesting. California Pizza Kitchen instantly increases the sweet and savory level by substituting BBQ sauce for tomato sauce. You can use your favorite BBQ sauce for this recipe, but if you are buying something new, choose a basic, tomato-based sauce for the best results.

Two types of cheeses are used

Sure, this homemade BBQ chicken pizza recipe has the mozzarella cheese you are used to, but it also has something else, a bit of smoked Gouda. Smoked Gouda (“GOO·duh” in English) is originally from Holland. It is a creamy, white cheese that the cheesemaker exposes to smoldering wood chips, giving the Gouda a rich smokiness that reminds many people of the smell and taste of bacon.

Although this recipe only calls for a very light sprinkling of smoked Gouda, you can feel free to replace up to half of the mozzarella cheese with it if you like the taste.

Let’s talk about the toppings

The toppings start with pre-cooked chicken. When cooking the chicken beforehand, make sure to slightly under-cook it to avoid the chicken pieces from drying out in the oven. Next, use a mandolin to cut the red onions as thinly as possible.

If you don’t have a mandolin, use a sharp knife and do the best you can. After the pizza comes out of the oven, sprinkle some rough-cut cilantro on top right before serving.

Some people think cilantro tastes like soap, and if you are one of those people, of course, you don’t have to use it. But if you have never had cilantro before, this is an excellent recipe to try it out. Cilantro is the leaves of the coriander plant, so if you like coriander seeds, you will also probably like cilantro. Cilantro’s unique flavor goes lovely with the sweetness of the sauce, the smokiness of the Gouda, and the acidity of the red onions.

Let us show you how easy it is to make homemade pizza on YouTube!

How to Make BBQ Chicken Pizza

Check out more of my easy chicken recipes and the best copycat recipes for casual dining restaurants here on CopyKat! 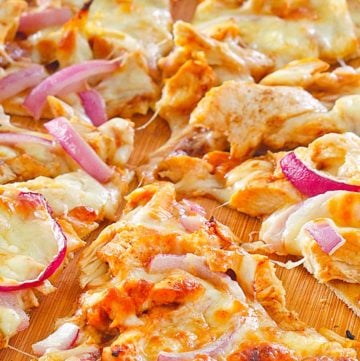 You can make this special barbecue chicken pizza at home, our copycat recipe is no secret.

To Make the Pizza